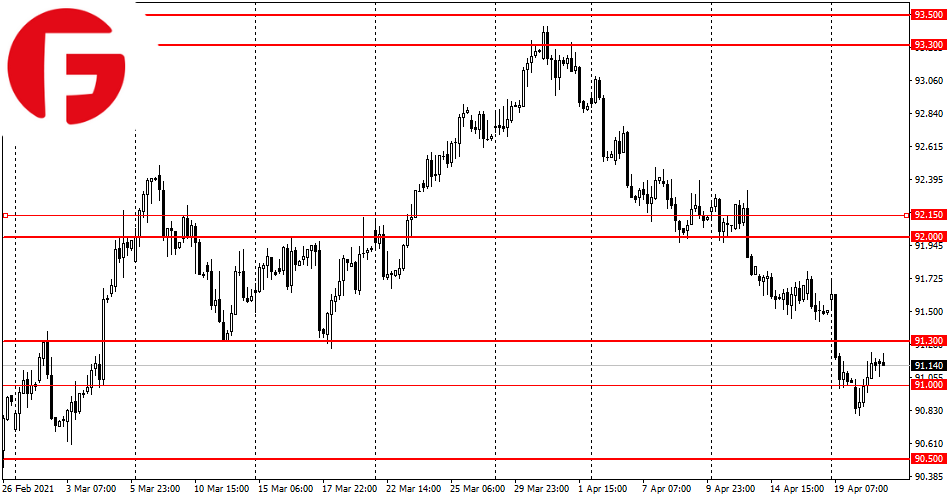 Despite the ability of buyers to return above the psychological level of 91.00, their activity remains weak. Thus, bearish scenario is still in the priority. The nearest resistance level is 91.30, break and fixation above which will significantly increase the risk of renewal of upward movement. It is also important to consider the dynamics of the price movement. After all, quick return of index quotations to 91.75 would indicate buyers' readiness to resume growth - this scenario is still alternative.

The nearest technical resistance levels and, as a result, the target levels are 1.2100 and 1.2175. No important macroeconomic reports from the USA and Europe today. After testing the technical resistance level of 1.4000, which had previously repeatedly kept the pair from more powerful growth, we see quite a deep corrective decline. Right at the time of writing the review the British inflation report was published. The actual data was better than the previous figures, but some indicators were worse than expected. That's why buying activity remained moderate.

Despite the corrective strengthening of the US dollar, the demand for the JPY remains weak. The return of quotations to 108.00 strongly increases the probability of further decrease of quotations to 107.00 and further to 106.45. A bearish scenario will be the priority until the pair's quotes return above 108.35. However only fixation of the quotes above 108.50 might be the first, although rather weak signal, which justifies the buyers' ability to resume growth.